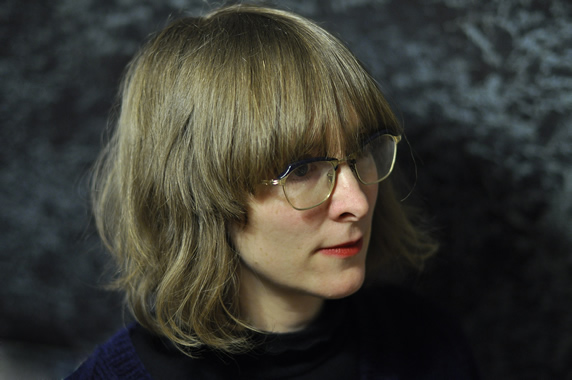 For ten years I’ve been making bodiless heads that, through the eyes, explore the interior world of their subject. Memory, contemplation and melancholy are perpetual undercurrents. Narrative plays a significant role in my work: spoken and written language and the transgressive role of comedy offer up many starting points. This is my framework, around which are woven themes that come and go. Feminism has been a recurring subject for me since my BA and is currently in sharp focus as a response to the new wave of feminist debate.

Increasingly I’m exploring what constitutes a face; what can be added/subtracted and how this affects meaning. I have been working with the covered face and also gouging out eyes, mouths, omitting noses in search of a representation that is more raw. Recently I’ve been exploring ideas around communication, those with power and voice and those without.

Grayson Perry describes the ‘visceral dialogue’ he has with his work.  This resonates, some days I have very specific intentions, but other days the clay leads the way and someone unknown to me emerges. I have been paying particular attention to the surfaces, mixing clays, and painting with more sparsety, giving the clay an increasingly prominent role in my palette of colours and texture.

After years of avoiding anything below the neck the body and body parts have crept in – most notably breasts, whose formal qualities and narrative possibilities provide a fertile subject area; the opportunity to engage with the tradition of the female nude is also significant.

Drawing is an important part of my practice; my process for the sculptures always starts with drawing into the clay. The pieces are slab built, with some elements constructed by coiling or sculpting. As soon as the form will support itself I start working on the surface, painting with slips, and underglazes and the wet clay itself. Most of the sculptures are single fired.

Clay is a fantastic material, it has a skin like quality, it gathers marks, indentations – it co-operates in the making.

Associate Member of the Devon Guild
Professional Member of CPA

The New Ceramics: Sculpting and Handbuilding by Claire Loder. Published by Bloomsbury 2013